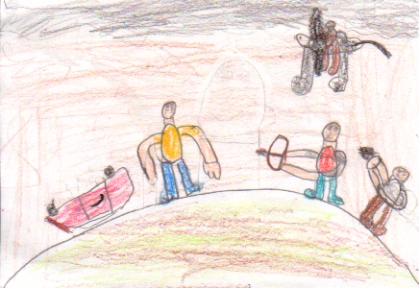 The Last Olympian is about Percy Jackson who figures out that he is no regular boy. This story takes place in modern times, but it is fought with many heroes of Greek mythology. Percy has the power of Posideon, the Greek God of Water. Kronos, the King Titan is trying to take over the world. Percy must face Kronos. He will need all the help he can get, because the only obstacle that stands in Kronos’s way is Percy. Kronos will do whatever is possible to stop him. Read this book to find out if Percy succeeds in the fight for the world.

My favorite part was when Percy has to find a way to defeat Kronos, and along the way he gets help from his friends. For instance, Annabeth also has the power of the Greek Gods.(Annabeth is a decendant of Athena, Greek God of Wisdom and War.) I also like how Percy’s parents come out of a car and pick up a weapon and start fighting to help him in his fight. I like the Stoll Brothers, who are Percy’s friends, because they are very funny and tricky when they are scouting for food and shelter. They try to take peoples’ possession and Percy has to stop them so they do not get into trouble. I like this book because it shows how a unique boy just wants to end a war and tries to make peace. It reminds me that we all have to work to make the world a happier place.

This book is part of a series-the Percy Jackson series. These books are all about Greek Mythology. If you like breathtaking adventure, daring stunts and comedy and a lot of mischief, a bit of sadness, and scary situations in one book, then this book is for you. I highly recommend it.