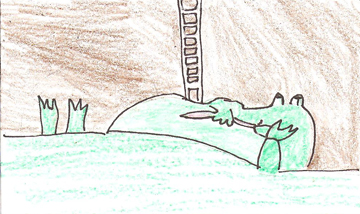 This book was great because it had a lot of funny pictures. My favorite part was when everybody did the crocodile walk. I thought it was very creative. The characters I disliked were Napoleon because Napoleon thought he owned the world. I also disliked the boy who called the crocodile a loser, because that was so mean. As I read the book, I felt bad for the crocodile because he was losing attention. I thought the illustrations were great, because they were colorful.

I would recommend this book to kids who love humor. The book might look boring, but it is funny. I am sure it will make kids laugh out loud. Other people should read this book, because the pictures have a lot of details, like the machine that captures the crocodile. Anyways, read the book and love it. Crunch!