On the Court with Kobe Bryant

On the Court with Kobe Bryant 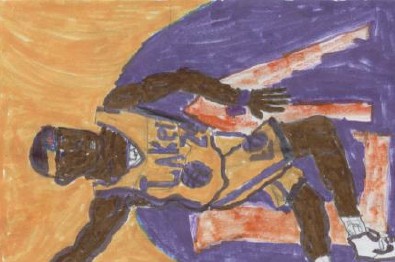 On the court with Kobe Bryant is a good book. Its about an NBA player who played for the Los Anglos Lakers. He is one of the best of all the NBA players in the world. He went straight to the NBA from high school. He still plays in the NBA to this day.

I like this book because I like basketball and I’m a fan of Kobe Bryant. I think he is one of the best basketball players ever. My favorite part of the book is when I discover that he and Shaq make a good team. I had two favorite characters: Shaquille O’Neil and Kobe Bryant. They are my favorite characters because they make a good team and they are both the best basketball players ever. The characters in this book did change because Kobe Bryant was Rookie of the Year. He didn’t do so hot, but then in between seasons he decided to work harder. Because of this, he became the starter in the second season.

I recommend this book for sports fans. Even if you're not a sports fan, you would probably would still like this book.