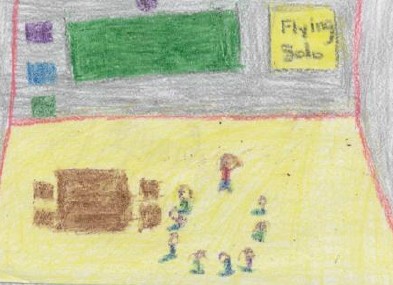 Flying Solo? Well, this book puts the thrill in school. Flying Solo is about a class that has a teacher that some of the girls have a crush on. But what happens when he is absent and the substitute doesn't show up? The class lets their emotions "fly". Find out what happens next in this "fab"ulous story.

I never wanted to put this book down. There was always a question that needed answered. My favorite character was Karen. She changed so much from the beginning to the end. She was a "goody, goody" but by the end of the book she was confident that she could rule the class with no problems whatsoever. I also thought that Jessica was alot like myself. She is very tall and she doesn't think that spending a day without a teacher is that great of an idea. My favorite part in the book was when they had a rock ceremony for Bastian because he is moving. They really tell everyone how they feel about the death of their classmate Tommy Feathers.

I recommend this book because it really gets your imagination moving. The whole time it had me thinking: "What if that happened to my class?" I think this book would be great for anyone between 7-13. There are 138 pages and it was written by Ralph Fletcher. It was definitely an on-the-edge-of-your-seat story.