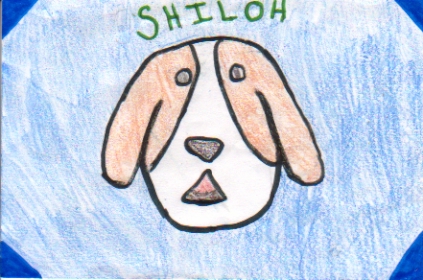 A boy named Marty went hunting and saw a shy dog. The dog followed him home. Marty showed the dog to his dad. His dad thought it was Judd Traveler's new dog. Judd abused his dogs. The next day he brought the dog to Judd. It was his dog. A few weeks later the dog that Marty named Shiloh came back. Marty figured out Shiloh didn’t like Judd. Marty decided to secretly keep Shiloh. He built a pen for Shiloh. The next night Marty was in his room and he heard barking and growling. He ran up to Shiloh’s pen and found a German Shepherd attacking Shiloh. Marty’s mom and dad heard the noise and came out. Marty’s dad said “That is Judd’s dog.” When they stopped fighting, Shiloh was almost dead. They brought Shiloh to a vet. A few weeks later Shiloh could walk again. Marty’s mom said “When Shiloh gets better you have to give him back to Judd Travelers. Judd heard Marty had his dog. Judd said if Marty could get the money, he could have Shiloh. When Marty got to Judd’s driveway he heard a gunshot. Marty looked and found out Judd had shot a deer out of season. Judd came up to Marty and said ”If nobody knows about this, you can have the dog. Marty knew Judd was mean to his dogs. He wanted to save Shiloh. Read the book to find out how Marty saves Shiloh.

My favorite part was when Marty finally got Shiloh because he worked very hard. He had to feel good about saving Shiloh from old mean Mr. Travelers.

Marty reminds me of me because when I wanted my dog, Buddy,I kept asking. I finally got him. I know how Marty felt when he wanted to keep Shiloh. This book made me wonder how people could mistreat animals. I didn’t like it when Judd Travelers was mean to his dogs.

There are three different Shiloh books by Phyllis Reynolds Naylor. They are Shiloh, Shiloh Season, and Saving Shiloh.

I recommend this because it is both funny and sad. It is funny when Marty can keep Shiloh a secret and nobody knows. It is sad when the German Shepherd attacks Shiloh and he can’t move. I would like 3rd and 4th graders to read this book because they would like it and have no trouble reading the words. They will like how much fun Marty and Shiloh have.