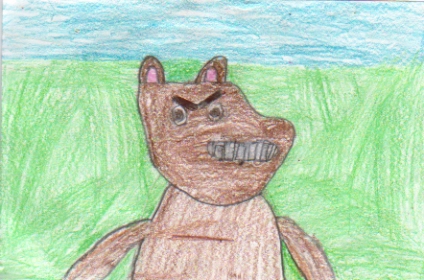 Justin was a boy who lived with his aunt and uncle. One night he was in the kitchen. He heard the dog barking. Justin knew that something was terribly wrong on the ranch. He went out to investigate. He saw many dead sheep. He found his dog had been seriously injured. There are huge paw prints in the yard. A grizzly bear is close. Will they be able to stop the grizzly bear before it completely destroys their ranch?

This book was scary at times, especially when Justin was in the woods for days. I kept wondering if he was going to make it out of the woods or if the bear was going to get him. It added a lot of suspense to the story. I like stories like this.

The bear was mad at first. When Justin got stuck in a pile of logs that was crushing his body, the bear helped him. Then the bear followed him everywhere. That was very unique. Usually a bear would not help a boy. It is like the other books that Gary Paulsen has written. The books are so good that you can’t put them down. They are usually about wild animals and about surviving being in the wild.

My favorite part was when the boy was rescued by the ranger. He was safe and could go home. I was happy because things turned out right.

I recommend this book because it teaches you a lot about bears and their habits. The readers that would like this book are readers that enjoy the suspense. Once you start reading this book, it's hard to stop. I feel that the readers would be most interested in learning about the main character Justin and all of the problems that he goes though because of the bear.