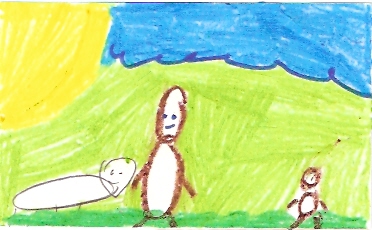 In this story, one half of the world has sun but the other half doesn’t. There are a lot of animals on the side with no sun. There is a wolf in this story. He can see in the dark but the other animals can’t. All of the animals got together and made a plan that they were going to steal a piece of the sun. First, a little possum dug a tunnel and when he got back there he took a piece of the sun. He put it in his tail, but on his way back the sun burnt his tail and all of his hair fell off. Then out of nowhere a bird said, “I’ll go.” He got there and he took a piece and put it in his crown of feathers. On his way back the sun burnt his feathers. When the possum got back, a tiny little voice said, “I’ll go, I’ll go.” It was grandmother spider and they let her go try even though they didn’t think she could do it. She made a clay bowl and when she got there she put a piece of the sun in her bowl. When she got back the sun was so bright that it popped out and went into the sky!

I loved this book because it's really fun and exciting. My favorite character was grandmother spider because she is so small but she could do so much. I also liked the illustrations because they were so bright and colorful and helped bring the story to life.

I think any kid would like this book because it's so much fun to read. I recommend it to all ages.