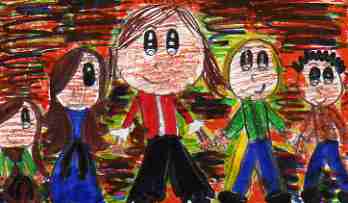 Prince Caspian is a story about four children named Peter, Susan, Edmund, and Lucy that go to Narnia to defeat King Miraz. They get help from Prince Caspian, a mouse named Reepicheep, Aslan the great lion, and a few others. As they attempt to defeat King Miraz, it is hard for these characters to get along. Read this book to find out about the wonderful world of Narnia. You will also find out what happens to the king.

I loved this book because it filled me with laughter and excitement. My favorite part of the book was when Reepicheep was killing all the bad guys. He went up to Prince Caspian and told him to say his last words before he died. The prince told him he was a mouse. Reepicheep replied that he was waiting for him to say something more interesting before he killed him. It was my favorite part because Prince Caspian told a joke for his last words. This book was special because it gave me a good feeling inside when I read some parts. It was not like the other books I’ve read because it had different types of characters. The characters in Prince Caspian were warriors and I hadn’t read about warriors before.

Kaleah C.
is a student in
Ms. Taylor's Reading Club