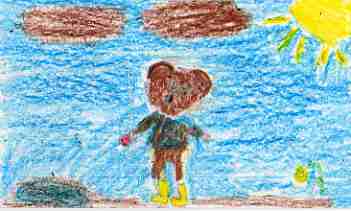 I think Paddington is an awesome book because it is hilarious and interesting. My favorite part was when Paddington did humorous dances. I think Paddington’s brothers and sister are very amusing because they bring Paddington their dad’s clothes for him to wear. He reminds me of my funny friend Emma. This is because she is sneaky and humorous.

I recommend this book to people who like story-telling books because Paddington’s book is more of a story book than a mystery or a fairy tale. I think Mrs. Pabley, a teacher, would like this book because she loves bears. This story might interest readers because there is a surprise at the ending. Kids who are 7-10 will probably find it more interesting.

Aubrey S.
is a student in
Ms. Taylor's Reading Club