Cyberchase: The Search for the Power Orb

Cyberchase: The Search for the Power Orb 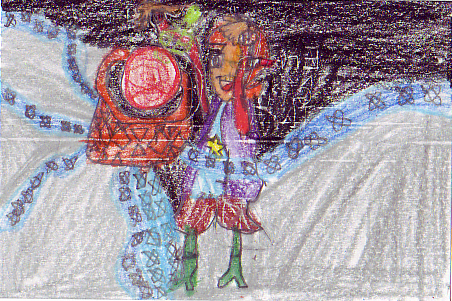 Can three kids stop Hacker, the most dangerous person in all of Cyberspace, which is another universe? Matt, Inez, Jackie, and their cyberbird, Digit, have stopped Hacker millions of times, but can they stop Hacker from getting the Power Orb so that he won’t make cyberspace disappear forever! The Power Orb is what makes Cyberspace exist. You’ll have to read the book and find out on your own!

Digit, the cyber bird, is a very unique character because he is a robot bird. How many robot birds do you see every day? In the story, Cyberchase, Izzy changed because at first he didn’t feel confident but later in the story Izzy felt more confident as he got closer to getting the Power Orb. My favorite part was when Izzy looked at the Power Orb directly and made a wish that Matt, Jackie, Inez, their cyberbird Digit, (Digit can’t fly now because earlier in the story he busted his rotor) and himself to fly and get back to the ship, Cybercruiser 6. I could really picture myself flying with them in the air. This reminds me of traveling to different places, such as Peru, Florida, and Washington D.C. In Cybercase: The search For the Power Orb they had to go to different places, such as Mount Doom, Serentia, and the Cybersea. I also found it interesting that Digit used to work for Hacker.

I’d recommend this book to people who are adventurous and brave because the characters in the book went to dangerous places and needed guts to get thru the task to get the Power Orb. I think the book is really great because it’s very descriptive and informative. The author described Ivanka’s ship and the book is informative because it also tells you how to unscramble words and how to use a decoder to open a jail cell to free Izzy. I think the setting would interest readers because it’s in outer space and has lots of different planets and lands. For example, Serentia is a great name for a planet. Another interesting place is Mount Doom, a volcano were the evil wizard Zorgon lives. If you don’t believe all of this information, go pick up the book and find out yourself!