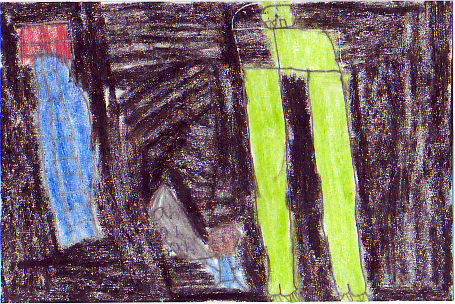 I liked Dinosaurs before Dark because it's a mystery with some action in it; two of my favorite things. I liked the way Marry Pope Osborne drew the picture of Jack when he was almost eaten. Fortunately, Annie made friends with a flying dinosaur to rescue Jake. In the whole Magic Tree House series the books always start with the same topic, lets go to the tree house, but the good news is that they are all different mysteries. When you read this book, make sure that you read the captions in bold letters. They tell you a little bit about the dinosaurs and what they eat. My favorite dinosaurs are the meat eater and the plant eater.

Even though the Magic tree house books have a lot in common , no matter what happens the Magic Tree House series is always number one! The action in this book will wow anyone who reads it because the action in it is really good. Mary Pope Osborne uses such great descriptions of the events in the book. In Dinosaurs Before Dark, Jack, one of the main characters changed at the end from being scared to being brave and did whatever Annie did. I am just like the Annie because if you tell me to do something I will do it with no thought first unlike Jack who has to think before he does anything. If you judge this book by its cover, you might think it looks boring. If you do you will be sorry because you're missing out on a fantastic book.

I would strongly recommend this book to some one who likes mysteries with a lot of action paced in one whole book. Students 8 and older could read this book on their own and get more out of it than younger readers. Younger kids could enjoy if the have their mom or dad read it to them but if they read it themselves they might not understand.