Warriors: Into the Wild

Warriors: Into the Wild 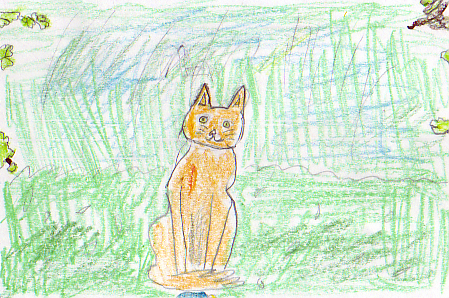 For centuries four clans of wild cats have equally shared the forest…until now. The Shadow Clan rises against the other clans and crush their hopes for survival. Thunder Clan is determined to take down the all mighty Shadow Clan. Unfortunately, the Thunder Clan has a problem. They are low on warriors to hunt for food and to scare off the other clans who are in their territory. The clan will try anything to get more warriors. Will they try a Kitty Pet? The clan thinks of Kitty Pets as weak animals who don’t know anything about the forest.

I find that Sandpaw, a cat from the Thunder Clan, is like my friend Devon because she doesn’t greet people very well. She usually messes up and says something wrong and the other person takes it as being offensive. Since these people don’t like her after her odd greeting, she doesn’t like them either. Therefore, they become enemies. The only difference between Devon and Sandpaw is that Devon doesn’t brag when she get to sit at the grown-up table. Sandpaw goes to the moonly, which is a big festival that is held once every full moon. All of the four clans get along for that one night a month. Devon also listens to her teacher, unlike Sandpaw when her teacher said “stop picking on the new one” she kept picking on him! I think that this book is very unique because it’s all about warrior cats and how they survive in the forest. The reason I think that this is so unique is because usually it’s all about people and how they live. As a reader, this is unique because we are people so we get to see a different point of view. I think that Ravenpaw and Yellowfang are very interesting characters because they don’t belong to only one clan. They actually belong to them all! They’re also very interesting because one is very old, hyper, and active, and one is very young and lazy. My favorite part is when Rusty, a former house cat, escapes his collar and becomes free he is able to join the clan. I like it because you never know what will happen next!

I would recommend this book to people who like warriors…and cats…and ninjas…and kung-fu ninja warrior cats! It is action-packed and full adventures. You never know what will happen next! I would also recommend this book to 5-8graders because the type is small and there are a lot of pages. Also, the vocabulary is on a grade 5 comprehension level. If this sounds interesting, go straight to your local library and pick up this book.