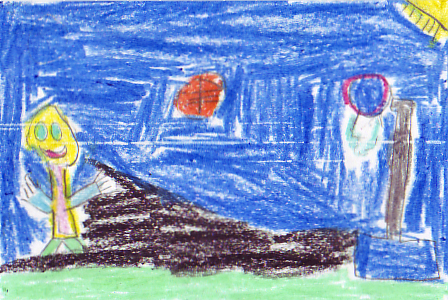 Glenn Marlette has a brother named Paul who is mentally handicap. Glenn plays for a basketball team called the Sabers. Now Glenn wants to teach Paul to play for the Sabers, even though they have the meanest coach ever. The author wants to teach us that people that are handicap can play sports. Will Glenn teach Paul to make the team? You’ve got to read the book to find out!

My favorite part of the book was when Paul made a basket on the other teams hoop. Don Marshang, another kid on the team, changed a lot through the story. At first, he was very nice to Paul. By the end of the book, Don is mean to him. For example, he tells Paul to sit on the bench and that it is his turn to shoot. I was thinking about how nice Glenn is to Paul. He lets Paul play all the time and is teaching him basketball. I like the illustrations in the book because they are black and white and you could see the pictures of what happens. I like this book because you’ll never know if Paul will make the team. I recommend this book to people who like basketball. You will like this book if you are in third or fourth grade.