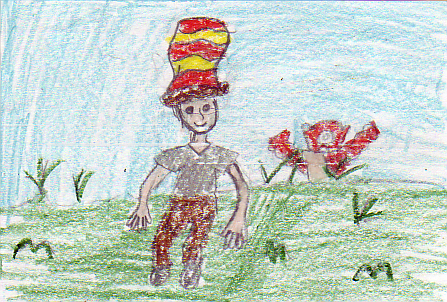 Twelve-year-old Percy Jackson now knows he is the son of the Sea God Poseidon. His mother had been hiding the secret for years. He brings his three friends, Tyson, Annabeth, and Grover, on an adventure try to save Camp Halfblood from the evil clutches of the Titan Lord Kronos and Percy’s ex-friend Luke. Throughout the story, Percy learned that Tyson is a very important person in his life.

Grover reminds me of myself because he is always getting himself into stuff and is always being dragged along everywhere. For example, Grover has to stay with the others when he is going back to Camp Halfblood, even though he really wants to go back to his quest. Luke changes throughout the story because he starts as being a helpful person, and turn into evil once he is tricked into doing a quest that he does not want. This book is like The Lightning Thief, which is the first book in the series, because Percy turns out to be the read hero by the end of the story. This book made me wonder if these gods are real or all just a myth. I have heard that people have claimed to see The Lost Temple of Poseidon, which is a place in this book.

I would recommend this book to people who like fantasy and Greek mythology. Kids who are 11 and up would like this book because there are some parts of the story that can be confusing and inappropriate for younger readers. For example, there are some scenes with intense fighting. It would also be helpful to read the first book in the series before reading Sea of Monsters, so you can fully understand all aspects of the characters and plot.

Andrew B.
is a student in
Ms. Greenberg's 4th Grade Class