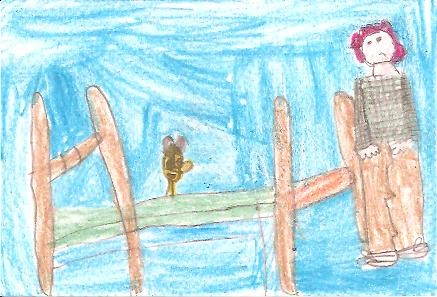 This story is about Alexander having a terrible day. When he woke up, he had gum in his hair because he was sleeping with gum in his mouth. (So one lesson from this book is to never chew gum before bedtime). Alexander’s brothers had toys in their cereal boxes, and Alexander had no toys in his cereal box. Alexander does not like sitting in the middle in the car, and he had to. At the end of the story, he was dreaming about moving to Australia!

Alexander has red hair. His drawings are outstanding. The book is funny, like when he drew an invisible castle. I felt bad for Alexander when he had no dessert in his lunch, but the other kids did. But I didn’t like character’s name though, Alexander, it’s too long.

People will like this book because it is funny. I would read this book to David, my baby neighbor, who is two years old. Every time I read a book to him, he relaxes.

Ricardo L.
is a student in
Page Turners After School Program / Rauschenbusch Center