Garfield and the Teacher Creature

Garfield and the Teacher Creature 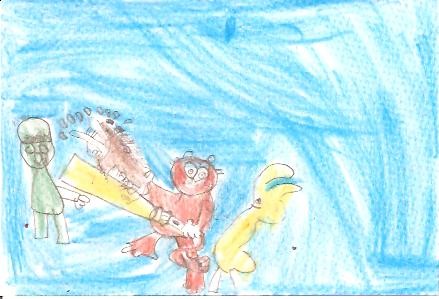 Garfield and Odie are going to the vet because Garfield was sick and not eating. On the way to the vet, they saw an abandoned school. They decided to climb in the window. As they walked through the school, they met a boy and heard weird noises. They were scared and started running. The boy was playing basketball and they all saw a monster. Garfield, Odie and the boy ran as fast as they could so they wouldn’t get eaten or hurt. Then they all bumped into the monster. Garfield quickly climbed on the monster’s head and they found out it was a guy! Garfield asked the man why he dressed up as a monster. The man said he didn’t want anyone coming into the school because weird things used to happen and he didn’t want anyone to get hurt. Suddenly, Garfield and Odie fell into a glass window and the man saved them from getting hurt. Finally, Garfield, Odie and the boy went home. They were happy because they didn’t have to go the vet at all.

I recommend this book to my mom because she loves scary things like movies and books.

Jeremy V.
is a student in
Page Turners After School Program / Rauschenbusch Center