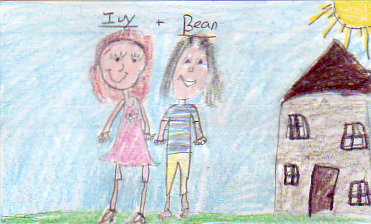 In the story Ivy+Bean, Bean (one of the main characters) plays a trick on her sister. Her sister decides to tell, so Bean decides to go to Ivy's house to get away from trouble and her sister. This forces Bean to meet Ivy, who she doesn't like and thinks is weird. Bean does not want to be Ivy's friend because Bean has tons of other friends. Bean thinks Ivy is very different from her. She thinks that Ivy has to be friends with someone else. But when Ivy and Bean finally meet face to face, not just staring at each other from different point of views from across the street their opinions change. Now that they have become friends, Ivy tells Bean a life changing secret. Will Bean tell or keep it a secret. Bean has some choices to make that will affect Ivy's life forever. Will Bean make the right choices? To find out read the book.

I think this is a great book because it's about friendship and helping one another. An example of this is when Ivy helped Bean get away and Bean helped Ivy become a witch. I liked this book because it shows how Ivy and Bean became friends. My favorite part was when Bean played a trick on her sister and pretended to be a ghost. It was my favorite part because she acted like a ghost and tried to scare her sister. She also stole her sister's twenty-dollar bill. Bean is the character that changed the most throughout the book. She didn't like Ivy at first but now they're best friends. In the beginning of the story, Bean didn't even want to be friends with Ivy. Bean's sister is responsible for helping this friendship come together. This story reminds me of something in my life. It makes me remember when I first met my friend Sara. I didn't really want to be friends at first but now her mom and my dad got married and were step sisters and best friends too. I hope that we always will be, not only with me and Sara but with Ivy and Bean too.

I would recommend this book to girls in grades 3-5. If you want to have a friendship with somebody that has a totally different personality then read Ivy and Bean. This book shows how two people with completely different thoughts and ideas can start a friendship. This is a great book because Ivy and Bean do all different things to help each other. This book very exciting!