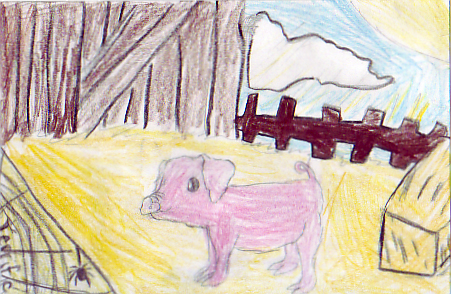 Do you like animal books with a zesty storyline, then listen to this! Charlotte's Web is an interesting story about a pig named Wilbur who is born as the runt of the litter. Originally, he was going to be killed by Fern's father but Fern pleaded to her father to keep him. Wilbur was raised at Fern's home until he was too big to stay in the house. After that, he moved to farmer Zuckerman's barn. When he arrived, Wilbur met a kind, motherly spider, a mob of farm animals, and a new journey was waiting for him.

Charlotte's Web is a funny, emotional story that will absorb anyone who reads this book. My favorite part was when Charlotte made the words in her web to save Wilbur from being killed by Mr..Zuckerman for food. One of the words is “terrific”. Wilbur reminds me of my brother, a happy-go-lucky person. However, when in trouble, he gets very serious. This story also reminds me of my family because I could be Fern, who sticks with Wilbur very often. My oldest brother would be the duck because he is stern and a leader. My parents are like Mr. and Mrs.Zuckerman because they are strict sometimes and have to get my brother out of trouble!

Kristi B.
is a student in
Mr. Richard's 4th Grade Class