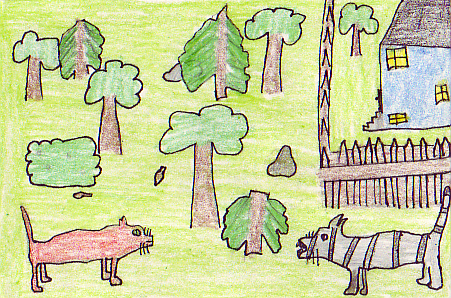 Have you ever wondered what it would be like to live the life of a cat? Well, in the book Into the Wild by Erin Hunter you will find out how an ordinary house cat turns into a hero in the world of wild cats. Rusty, a friendly house cat, always wondered what the forest would be like. Eventually he gets the courage to cross the fence. When he does, he finds himself face to face with Gray Paw, an apprentice from Thunder Clan. Will Rusty be clawed down the face or will he be able to hold his own in a fight with the wild cat? You'll just have to read this exciting book to find out.

I like the book because it tells good descriptions. For example, it might say, "The smooth grass brushed against Rusty's silky fur as he stalked a small gray mouse scurrying across the hard ground" instead of "Rusty saw a mouse." My favorite part of this book is when Rusty fought Gray Paw. This is because Rusty is just a house cat, but Gray Paw is a clan cat and trains for fighting. One of the reasons I like this part is because it has a lot of action and interesting vocabulary. For example it said "Suddenly, Rusty heard a rustle in the grass, he guessed it was a mouse, before he new it he was running for his life."

I like the character Rusty. I like him because he's a strong and noble cat. I know this because one of the Thunder Clan warriors tried to kill Rusty, but he fought him off. Also later in another book from this series, he saves his leader.

As I mentioned, this book is part of a series. Into the Wild is different from the other books in the series because as the books go on Rusty is more accepted into the clan and sometimes gets very great honors. It is an important book because it will help you understand the events in the other books.

I recommend this book to people who are ages 9 and up. I would recommend it to this age group because it would not be a good book for younger readers since it has violence in it. There is fighting and some gory scenes.