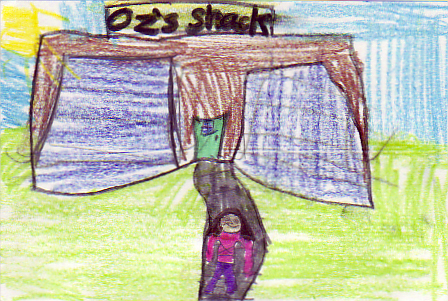 The Growling Bear Mystery is about four siblings named Henry, Jessie, Violet, and Benny Alden. They are going on a hike with their grandfather in Yellowstone Valley. Legend says that there is a lost cabin on the trail that is filled with gold nuggets. Suddenly their map disappears! Was it stolen? Can the Alden children find the map and follow it to the cabin?

I like the author Gertrude Chandler Warner because she made the character Benny so funny. For example, when Jessie says that Sam never talked with the Alden children, she wrote,"'He talked to me," Benny said. He said, 'Your turn.' when we were playing Old Maid.'" I also like how the children found the lost trail map that leads to the cabin in the trash can. The ending was surprising to me because the guilty person wasn't who I thought it would be.

I would recommend this book to third, fourth, and fifth graders who like a good mystery. When you read it you won't want to put it down because you'll want to find out what happens in the end.