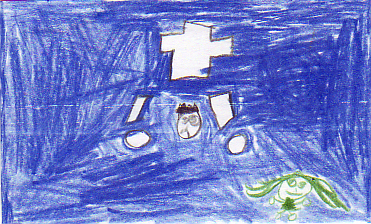 I thought the book was very entertaining! Even though at some parts I thought I was nearly fainting! Also in one part, I thought I was under water with Stephanie. My favorite part is when Skullduggery Pleasant did some thing that I cannot tell you about because it would give away the story. However, Derek Landy sure put in description. “The world was turning gray,” was one of them. I never wanted to put the book down! When my favorite scene ended, the adventure went back to Stephanie's house where she learns something HUGE. I can tell you this though my favorite scene involves Serpine and the book of names. I found Skullduggery interesting because he is only bones no skin and he can talk. This was shocking to me when I found out. Tanith Low reminded me of myself because she never gave up and did her best. As I read the book, I felt scared and a little bit confused. The book made me wonder will Stephanie and Skullduggery survive? I kept thinking that the author would take me to a different place and then unexpectedly he would! I hope Derek Landy makes a sequel to Skullduggery Pleasant!

I would recommend this book to fantasy lovers ages 10 and up. This is because there is some gory details I will not name.