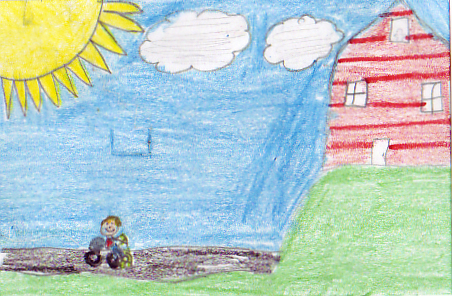 One ordinary May morning 12-year-old Ted, the detective, is riding his bike to his one room schoolhouse expecting another boring day. However, on this Tuesday, things were a little different. He is passing by the Anderson's abandoned farm, when suddenly, he sees a white glowing face at the top window. He starts to wonder what it is. By the end of the day, he has thirty possible explanations for it. What is it? And why is it mystifying Ted so much that he is going to go up there-and find out?

My favorite part is when Ted is at the Anderson's farm and he sees his teacher drive by. I liked it because he did not know what to do so he froze and tried not to be seen. I like when characters almost get caught and they have to find a sneaky way out of it. I like the character Ted because he is brave. He actually went to see what was in the window. I am like him in this way. One time I heard a noise in the woods and I went to go investigate. I know how Ted feels because he was nervous and so was I but we both knew it had to be done. I also like how Ted goes to a one-room school house with a population of ten students! I think he is lucky because if he had a question he would not have to wait. I also think he is unlucky because at recess, his only choices are little kids and big kids. It must be hard for Ted! I think Ted changed a lot in this story. In the beginning, he is really rude and lazy. He would never do his chores and he would always be late for delivering the newspapers. He wouldn’t care if he got in trouble either. In the end, he is a more responsible, caring, person. He would do all of his chores and deliver the paper extra early. Plus, he would deliver the groceries and he helped a family in need.

I recommend this book to any boy or girl ages 7-10 who loves action, suspense, surprise, and a little bit of sadness. This book was flawless. I never wanted to put it down. I wish there was a sequel!