Ivy and Bean And the Ghost That Had To Go

Ivy and Bean And the Ghost That Had To Go 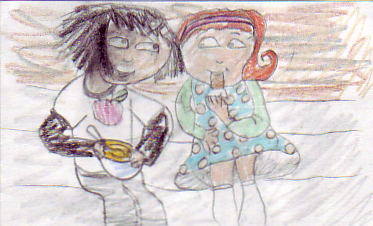 Ivy and Bean and the Ghost That Had to Go is written by Annie Barrows and illustrated By Sophie Blackall.

Who? Ivy and Bean that's who. They are two children that never thought of becoming friends. This book is the second book in the mouth opening series of Ivy and Bean it's about two friends that see a ghost in the bathroom! They tell everybody in class that there's a ghost. So Ivy and Bean decide to investigate. After making their secret potion they are ready to expel the ghost from the bathroom!

I liked the book Ivy and Bean And the Ghost That Had to Go because it's humorous, and it always makes you think about what's gong to happen next. In the story, one of the characters changes by being nice and helping Ivy and Bean expel the ghost. I think this part is very suspenseful because it's very shocking to find out who it is. My favorite part in the book is when Ivy and Bean ask Nancy (Bean's older sister) if she trimmed her hair. It's very funny because Nancy never really didn't find out who cut her hair. This book is the second book of the mouth-opening series of Ivy and Bean. These books are different and similar because they don't always solve a problem in each book. The series is similar because it always has a suspenseful ending, because it makes you thinks what's going to happen in the next book. I like the ending because you know what happened to Nancy's hair if you have read the book.