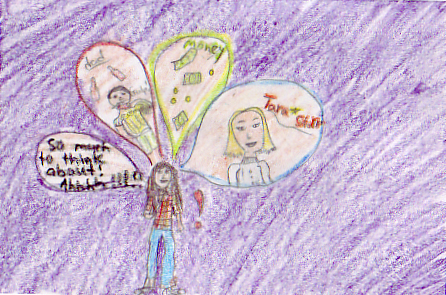 This book is about two best friends in the seventh grade. Elizabeth and Tara always supported each other and had long conversations. But then crazy things start to happen when Tara moves away. Elizabeth's family is spinning out of control and Tara Star's mom is going to parenting classes! Now since they can’t talk in person they have to communicate by letters. How crazy will things get? Will Elizabeth and Tara ever get to see each other again?

The character that I found interesting was Elizabeth. The reason I liked her was that she shows her feelings. For example, Elizabeth talks to Tara, her mom and Mrs. Jackson when she is feeling sad about her dad. She feels a lot better after she talks to them because she is no longer holding in her feelings. Once I felt exactly like Elizabeth when I was feeling sad about my parents so I also went and talked to someone to feel better just like the book. I think this book is unique because Tara and Elizabeth communicate by letters. This is the first book I have read like this. I thought it was clever because most authors would make two girls talking in person but Paula Danziger did not. Since the author had them communicate in letters, it helped me understand the book more because they wrote differently. When Tara wrote she was sort of bragging, and when Elizabeth wrote she shows her feelings and tells Tara if she says something mean. So when Elizabeth or Tara write I see they what they are like and how they feel. I see their personalities open up. There are a lot of other kids out there that can relate to Elizabeth in the book. Kids who have parents who are divorcing would understand how she feels. They’ll be able to have feelings for Elizabeth and understand how it felt for Elizabeth’s parents to get a divorce. I think that there are two characters in the book that changed. They were Elizabeth's dad and Tara. But they didn’t change in the same way; Elizabeth’s dad changed in a bad way and Tara changed in a good way. Tara used to be snotty, stuck up, and bragging in her letters. Then she changed and apologized to Elizabeth for being mean . But Elizabeth's dad changed in a bad way. He developed a drinking problem. For example, Elizabeth found four bottles of vodka in the back of her pantry. She didn’t know what it could be for. She wondered, "Are they having a party?"

I would recommend P.S. Longer Letter Later for girls ages 9-14. If you're the kind of person that likes emotional books where two best friends open their personalities to each other, then this is the book for you!