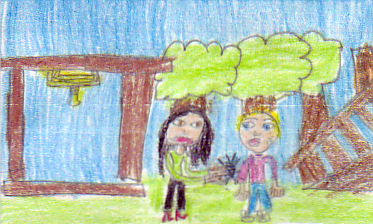 I think the book Shakespeare's Secret, by Elise Broach was great! It was full of surprises and other people were meeting each other in so many different ways. This book makes you think like a character in the book.

Hero Netherfield named after a person in a Shakespeare's play is new in town and is having trouble fitting in. However, this time it is different. Her neighbor Mrs. Roth tells Hero about a diamond the size of a walnut! Danny an eighth grader comes along the way and finds out Hero is looking for the diamond and tries to help her find it. Mrs. Roth tells all sorts of information that is about Shakespeare's time. Will they succeed in finding the diamond? Or will they get caught by Danny's father, a police officer? Together they will test their talent and ability.

My favorite part is when Hero, Danny and Mrs. Roth find each other just from a picture in Mrs. Roth's house. It was my favorite part because it is one of the surprises you never expect in the book. Hero is an interesting character because in the beginning of the book she is not as happy or confident as she is at the end. Even though she is shy, the author describes how she makes people smile. Hero's character changes a little because at first, she is shy and when it comes to the middle she gets braver and at the end, she is just casual. Her character can be angry a few times in the middle, but mostly she is shy. This book is interesting because after they solved mystery the author kept going. She (the author) found a great way to connect two characters together at the end of the book which was very interesting because would not see it coming.

I recommend this book to people who love challenging mysteries. Also, kids who are ages through 9 and 12 because it can be challenging at times. People that love reading might be interested in the Shakespeare's Secret and you will never want to put it down.