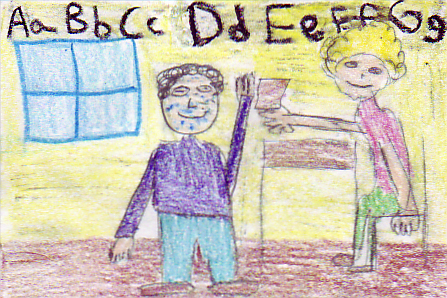 Andrew is an 8 year old boy who loves freckles. In his class, a boy named Nicky, has freckles on his face, ears and neck. Andrew is very jealous of him. He really wants freckles. Then one day Sharon a girl in his class said, "I can give you my freckle juice." Will he get freckles or is it a cruel joke?

This book was very funny. I think this because freckles are natural and Andrew thought he could get them by drinking a special juice. When Sharon, in Andrew's class, told Andrew that she had a recipe called freckle juice he thought it was true. When Andrew got home, he got the ingredients so he could make the juice. After he drank it, he got sick. That is when he knew it was a joke. Then he got an idea to put blue marker on his face to make him look like he has freckles. I think this is funny because freckles are not even blue. The character Andrew is different from me because he wants to look different but I like how I look. Andrew was also different from me because he believes whatever Sharon told him. He drank the juice and did not question her. I would make Sharon drink the juice first to prove that it worked. The illustrations are in the book because they are funny and they helped me get a better picture of the story. Miss Kelly, Andrew's teacher, is very nice. She does not tell the whole class that Andrews’s freckles are not real. She took Andrew to the side to give him a box that told him a recipe to get the freckle off. She did not embarrass him.

I recommend this book to kids that are in 2nd through 4th grade. This book will make you say, "I do not want to stop reading" because you will want to see what happens to Andrew.

Peter B.
is a student in
Mrs. Weitzman's 4th Grade Class