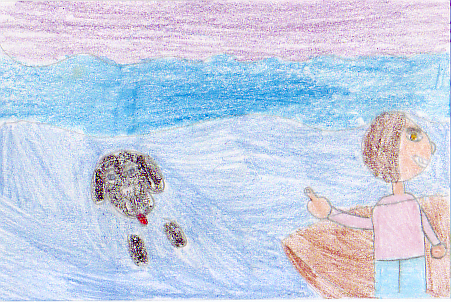 Tom Campbell is a thirteen year old boy who lives in Back o'the Moon island off of Canada. Orphaned at a young age, Tom got adopted by Fiona and Enoch Murray. He longed for a dog of his own. One day when they were out fishing there was a terrible thunderstorm, in the sea. Trying to get to shore was a beautiful black Newfoundland dog! Tom pulled him, kept him, and named the dog Thunder. Tom's dreams had finally come true. But when Thunder's owner appears and Fiona's pregnant, it looks like Tom's dream is disappearing. Will Tom still be loved by the Murray's after the baby's born? And will Tom have to give Thunder away forever?!?

My favorite part was where Tom found Thunder in the thunderstorm and let him live with him. I liked it because it shows me Tom's character. He has a caring heart because he took pity on the dog. My least favorite was where Amos shot Thunder in the back. I didn't like it because I hate when animals get hurt, especially dogs. It shows me that Amos has a mean cruel heart. The character that changed the most was Amos because after he shot Thunder he realized that Thunder was warning them that a tidal wave was heading right for them. After that, Amos never did anything to try to hurt Thunder. He turned from cruel to nice. As I read this book, I had mixed emotions. I felt happy, when Thunder got saved and sad when Thunder was shot. I felt scared, when the wave came and almost killed Thunder and angry, when Amos did not care he hurt Thunder.

I recommend this book for grades 3 through 7 and dog lovers because the main character is a dog. This is a very suspenseful book. I think this is a dangerous and daring book because there are terrifying storms, loud gunshots, and major earthquakes.