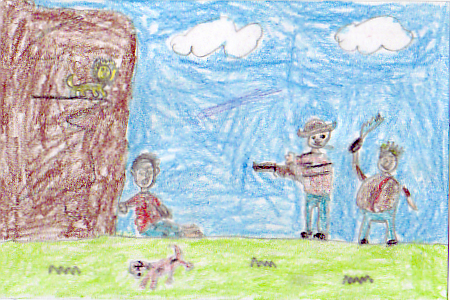 Adam is a 13 year old boy living with his mom and sister. He also has a red dog that has no name and was found in a cave. His real dad died and his mom married Sam. Adam disliked Sam because he thinks no one could replace his real dad. Then one night Sam has to go to Cheyenne and Adam is left in charge. Strangers come by and hold his family at gun point. Adam escapes and the red pup gets loose. If there's one thing the pup is great at, it's tracking Adam down. Will the pup get to Adam and will Adam be able to warn Sam about the men in the house?

I liked this book because I like books that have dogs in them because they are one of my favorite animals. That is why I have a dog. I also liked it because it was historical fiction and that is one of my favorite genres. I like the way the characters talk like when they say “I recon”…and I like how they live in log cabin. I like to imagine how it was like back then. This book reminds me of the book A Dog Called Kitty. This is because in both books they find a dog. They also both took the dog home because it looked weak and hungry. If I were them I'd do the same thing because I wouldn't want to see them suffer. Adam's sister Lauren reminds me of my sister because at one point Lauren was annoying and my sister is also annoying sometimes, but I love her. For example Lauren kept giving her mom a hard time by talking to her when she was working and sometimes my sister bothers me when I'm doing my homework. I think Adams mom got braver at the middle because she was guarding the window with a gun. I think she was braver because the lives of her kids were at stake. At the beginning the man held her by the neck and Adam had to save her because she was scared, but by the end she could take care of herself.

I recommend this book to kids in fourth and fifth grade because there are guns, knives and murderers so that proves it's too violent for little kids. This book is worth reading because you're always wondering what will happen next. This book should also be for boys and girls who like historical fiction and dogs. If you like dogs this is a book for you.