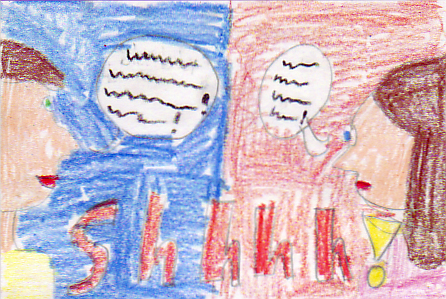 Dave is a 5th grade boy who's got a thing against girls. He claims girls talk more than boys. He got the idea from his report on India. He heard about a man who spent a whole day without talking, once a week for a year. So he challenges all the fifth grade girls to not talk for two days. But his plan backfires when the girls dare him back! Will Dave prove his theory that girls talk more than boys or will boys out talk the girls?

Something I like about this book is Andrew Clements makes what the characters say sound realistic, like something a 5th grade boy would say to irritate a girl. For example, when Dave says “I bet if you stopped talking for 5 minutes your head would blow-up!” I like this because Andrew Clements makes it sound real, like I'm listening to the conversation that they're having with each other. I found Lynsy interesting because she had to be the best. For example, when Dave comments rudely about her non-stop talking, she completely denies it even though it's proven throughout the book. I think she knew it would be hard to stop talking because it was what she did. But she did it anyway to show how great she was. This book is unique because of the plan. I like the idea of an entire grade not talking for two days. I like this idea because it sounds like it would be really challenging to try doing. For example, one challenge that the kids faced was if you get called on in class, what do you do? You can't talk! The illustrations in this book are unique because all the characters are off to the side and out of the way instead of in the center. They're in pen and ink with loads of detail. The pictures show depth and they even get the wood and the hair to look realistic.

I recommend this book to kids in 3rd to 5th grade because it's a tricky book to follow, but has an entertaining story in the end. This book is good for kids who like ridiculous stories. If this describes you, get off the internet and read this book!