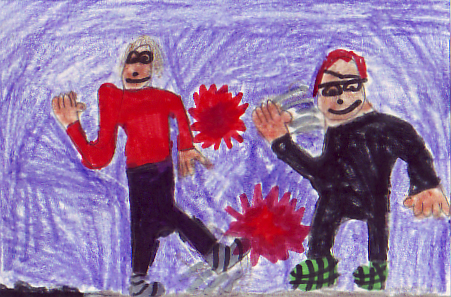 What do you expect to be doing at age 14? Working? Do you think at 14 you'd have the skills to be a spy? Well poor Alex Rider was forced to do just that after the death of his uncle. Alex lived with his uncle because his parents died. The police told him his died uncle in a car accident. But, when he looks at his uncle's car, he sees bullet holes and blood stains. He knows the police are lying and soon finds himself in an intense operation with M.I.6, the British secret agent organization. He finds himself in a world of gadgets, car chases, and assassins. Will Alex be able to complete the assignment he was given by M.I.6 or will his fate be the same as his uncle's? You'll have to read Stormbreaker by Anthony Horowitz to find out!

This book is a great page-turning thriller! To be able to picture Alex do daring spectacular stunts, like jumping from the side of one window to another, more than ten stories off the ground is very imaginative. It keeps you on the edge of your seat. Also, when Alex was in a car chase he had to think on his feet and be quick to decide whether he should use a gadget or not. Being able to do this is not only a quick thinker but also creative. This book is realistic fiction though I think the author should have made it fantasy because the chance of the events happening are so slim! For example, I doubt a kid would be a spy, at least not at age of 14. I thought the story line of this book was outstanding! I mean after all, it's a 14-year-old spy. What 14-year-old boy wouldn't want to do that? Also Alex does some funny stuff, like when he let Harold Sayle beat him in billiards. After the first game, they bet lots of money and that's when Alex stopped letting him win and totally beat him. He won thousands of dollars.