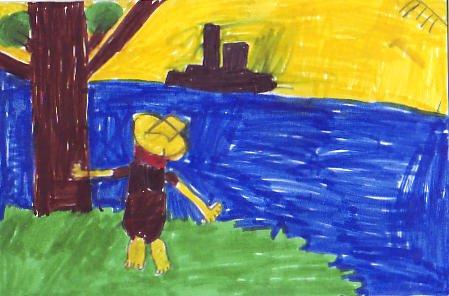 Have you ever wanted to run away? A boy named Huck Finn wants to run away from his mean and drunken father. He is always whipping Huck and leaving him home alone. One night when his father is out Huck pretends to be murdered. He goes to an Island and meets a runaway slave named Jim. At first Huck is scared, but soon they became friends. They go on many adventures, but on the way, they run into trouble. Will their search for a new home be completed? Read Huckleberry Finn by Mark Twain to find out.

If I could rate this book on a scale of 1 to 10, I would rate it a 9. It gives a lot of detail and has a lot of action in it. Mark Twain gave so much detail describing Tom Sawyer that I could picture him walking down the street in my head.

My favorite part was when Huck's best friend Tom Sawyer was shot in the leg. If Huck did not run in and risk his life to save Tom, Tom would have been killed. Tom is very lucky to have a friend like Huck.

I like Huck. He is very clever. When his dad was always mean and drunk, Huck was clever enough to pretend to be killed without being caught.

Huck reminds me of myself. Once I ran away because my whole family was being mean. So, I took off for the woods. Huck did the same thing, except that he didn't come back.

I would recommend this book to boys from the age of 10 to 12. Any boy this age who likes adventure stories would love this book. I am saying this because many kids 9 or under wouldn't understand the words or might not get how the character feels.