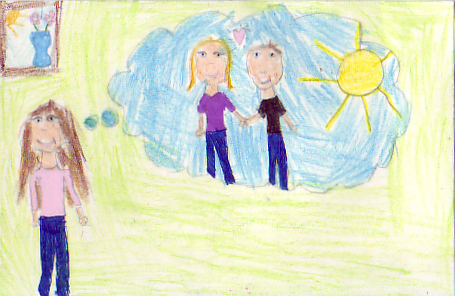 It is so ironic that a wedding planner would not have had a wedding of her own, isn't it? Well, Stella Havisham did just that. Her 12-year old daughter, Willa, puts so much effort into getting her mother married. All Willa ever wanted was a dad and a normal life. One day, a poetic sailor moves in next door. Can Willa set him up with Stella before it's too late? Read, The Wedding Planner's Daughter and find out!

I like this book for many reasons, but my favorite part was when Willa stuffed her bikini top with tissues to make it look like she had “big boobs”. I found it funny because the tissues eventually fell out and made her look like an idiot! This reminded me of a girl I used to know. She stuffed her bra, too. Then one day, it overflowed.

I also liked the way the author put a line from a famous book or poem before every chapter. These quotes referred to the problems the character faces in the following chapter. Many of the quotes were from classic books such as Little Women, The Secret Garden, or Anne Of Green Gables.

As I was reading this book, I found myself getting a bit angry with Willa. I feel she was pushing too hard. I know she wanted a dad and she wanted Stella to be happy, but I wish Willa put a little less pressure on her mother. She did it for the right reasons, but she should have gone about it a little gentler. Stella’s heart was still fragile and Willa shouldn’t have tampered with it. That would make more sense.

Throughout the book, as much as I enjoyed it, what really confused me was how sometimes Willa referred to her mom as “Stella” and sometimes referred to her as “mother”. This made me wonder if Stella was Willa's mother or her friend. I think the author should have chosen one of the two references to call Stella.

I feel Stella changed a lot from the beginning of the story to the end. She went from being an uptight woman who was afraid of love to an easy-going, kind person. I think that change was for the better! This made the book worthwhile because it ended the way I was hoping it would.

I would recommend this book to a 4th through 6th grade girl who enjoys reading about romance. This book has the perfect hint of it, for both characters! I do not think a boy would enjoy reading this book because the main character is a girl and she discusses things like boyfriends, growing up and other girl-talk.