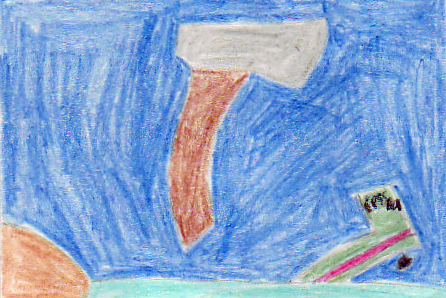 Have you ever wondered what living in the woods is like? Well if the answer is yes, you must read Hatchet. Thirteen year – old Brian Robeson is flying to his father in Canada since his parents are divorced and live far away from each other. While flying in the single engine Cessna plane, the plane falls out of the sky. Brian is not killed but is lost in the Canadian wilderness. Can Brian get out of the wilderness to this father? Read the book to find out.

I like the book because it is packed with action and keeps me on the edge of my seat; whether it is tornados, bears, wolves or moose. Hatchet is like other books by Gary Paulsen because the theme is man against nature. The main character, Brian, is trying to survive. It was interesting to see how Brian changed during the adventure. Later in Brian's adventure, he started treating food like gold. Before he got lost in the wilderness, he took food and family for granted. Even though I like food, I do not treasure it. In this way I am like Brian before his adventure began.

However, most of all I liked Brian because of his commitment to survive. Other people might not have believed they could survive but Brian did.

I would recommend this book for third to eighth grade boys who love action. Brian is about that age and it might be easier for kids that age to relate to him.

Anthony A.
is a student in
Ms. Kinn's 4th Grade Class