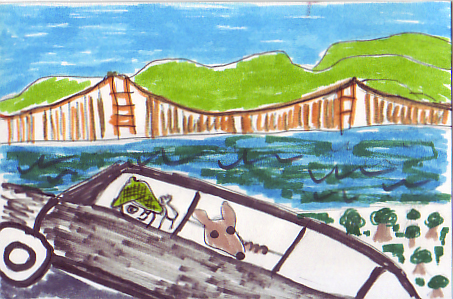 Nate the Great the San Francisco Detective is about a boy detective who goes to San Francisco to visit his cousin and gets called on a case. A boy named Duncan loses his joke book called Joke Stew. Nate volunteers to help him find it. They retrace Duncan's footsteps to see if they can locate the book. It shows up in a most unusual place.

I like this book because it is vey unpredictable. You never know where Nate and Duncan are going to go next. I also think it was interesting how Sludge, Nate's dog, ended up helping to find the book. To me Nate is a good detective. He never stops until the case is solved.

I would recommend this book to strong first through third graders who like Nate the Great books. It is a just right book because there aren't a lot of tricky words. I liked it and I think you will, too!