#6 A Jigsaw Jones Mystery: The Case of Hermie the Missing Hamster 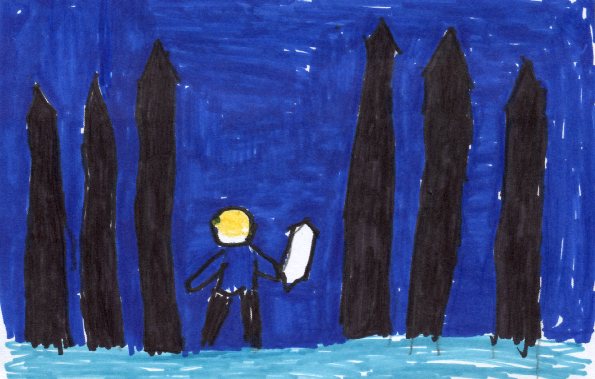 Percy Jackson went to school and had a substitute teacher that was evil. Percy had to go to camp called Camp Half Blood. Only half bloods could go to that camp. No monsters or anything but half bloods were allowed there. At t he camp there was a minotaur who later kidnapped Percy's mom. Percy thought that she was dead, but she was really stuck in the underworld.

Percy and his friend had to find a way to rescue his mom, so he went to many places. One thing they had to do was get a pearl from Medusa. Then they had to go past these dragons that were disguised as people. The second pearl was on a stutue, but first they had to find a way to get past the dragons and get Medusa's head because it could turn anything into a statue. The last place they went to was a casino in Hollywood. They had to find some lotus flowers and were stuck there for a couple of days. They finally got to the underwold. Percy wondered why everyone kept attacking him and he finally figured out that everyone thought he was the Lightning Thief.

Percy had to go to Hades to get his mom back. He told everyone the truth, that he was not the Lightning Thief. Percy got a shield that had a lightning bolt sticking out of it. He figured out that Luke stole the lightning bolt. Percy ended up going to the Gods to return the lightning bolt.

I would not change anything in the book because I liked it the way it was written. My favorite part of thes tory was when Percy found the three pearls because it meant that he now had a way to escape. My favortie character is Percy because he can read words that are mixed up and he can control water. My least favorite character is his mom because she does not do much in the story.

I think others should read this book because it is exciting. There are alot of different things happening in it and it is full action and adventure.